Imsidolimab, previously known as ANB019, is an antibody that inhibits the function of the interleukin-36-receptor, or IL-36r, which we are developing as a potential first-in-class therapy for patients suffering from generalized pustular psoriasis (GPP).

GPP is a chronic, life-threatening, orphan systemic inflammatory disease characterized by the development of widespread pustules marked by exacerbations. No approved therapies are available for GPP in the United States or Europe. In severe cases, GPP patients can die from cardio-pulmonary failure, exhaustion and/or infection subsequent to occurrences of pustular flares. Studies have shown that GPP is associated with uncontrolled signaling through the IL-36r, which in some patients can be mediated by genetic mutations. While initial GPP epidemiology studies suggested at least 3,000 GPP patients in the United States, medical claims analyses conducted by IQVIA indicate approximately 37,000 unique patients were diagnosed with GPP at least once, and approximately 15,000 unique patients were diagnosed with GPP at least twice, by a physician between 2017 and 2019 using the International Classification of Diseases 10th Revision (ICD-10) billing code pertaining to GPP (L40.1).

We have conducted a single arm, open-label Phase 2 trial of imsidolimab in 8 patients with generalized pustular psoriasis, or GPP, also known as the GALLOP trial. Patients were enrolled among 12 sites located in the United States and Europe. Patients were washed out of prior therapy and no concomitant therapy was permitted during the trial. Key inclusion criteria include active ongoing GPP disease with a minimum mJDA-SI score of 7 and at least 10% body surface area covered by active pustules and erythema, while key exclusion criteria included concomitant dermatological conditions or infection. Patients were treated with a 750mg intravenous induction dose of imsidolimab at Day 1, followed by monthly 100mg subcutaneous doses on Days 29, 57 and 85 during the 16-week study. The primary endpoint of this trial was clinical response on the CGI scale at week 4 and week 16 without rescue therapy. Baseline clinical assessments were conducted for each patient on Day 1 prior to imsidolimab dosing.

Top-line data from the GALLOP trial was presented at the European Academy of Dermatology and Venerology (EADV) 2021 Congress on October 2nd 2021. Six of 8 (75%) patients treated with imsidolimab monotherapy achieved the primary endpoint of response on the clinical global impression (CGI) scale at week 4 and week 16 (Table 1), without requiring rescue medication. Two of 8 (25%) patients were considered to have not met the primary endpoint because they dropped out of the trial prior to Day 29. Modified Japanese Dermatology Association severity index total score (mJDA-SI), which incorporates both dermatological and systemic aspects of GPP, decreased on average by 29% at week 1, 54% at week 4 and 58% at week 16. Erythema with pustules, which clinically defines GPP, decreased by 60% at week 1, 94% by week 4 and 98% by week 16. Dermatology Life Quality Index (DLQI), which is a patient-reported measure, achieved a reduction of 6 points at week 4 and 11 points by week 16, each of which exceeded the minimal clinically importance difference (MCID) of 4 points. GPP Physician Global Assessment (GPPPGA) scale was implemented by protocol amendment during the course of the trial and was assessed in 4 of the 8 enrolled patients, where zero (clear) or 1 (almost clear) response was achieved in 2 (50%) patients at week 4 and 3 (75%) patients at week 16. Genotypic testing indicated homozygous wild-type IL-36RN, CARD14 and AP1S3 alleles for all 7 tested patients. Through week 16, anti-drug antibodies were only detected in one patient, which occurred at week 12 and did not impact imsidolimab pharmacokinetics or efficacy.

Imsidolimab was generally well-tolerated and most treatment-emergent adverse events were mild to moderate in severity and resolved without sequelae. No infusion or injection site reactions were observed. One patient dropped out of the trial following diagnosis of Staphylococcal aureus bacteremia in the first week, which was a serious adverse event deemed to be possibly drug-related. Because the patient was symptomatic prior to dosing and had a prior medical history of bacteremia, a common comorbidity of GPP, the Company does not believe this event is likely attributable to imsidolimab. Another patient dropped out of the study on Day 22 due to investigator reported inadequate efficacy. One patient contracted COVID-19 during the course of the trial, which was mild, unrelated to imsidolimab, and did not lead to study discontinuation.

In July 2020, the U.S. Food and Drug Administration granted orphan drug designation for imsidolimab for the treatment of patients with GPP. We initiated a Phase 3 trial, called GEMINI-1which will enroll approximately 45 moderate-to-severe GPP patients, each undergoing an active flare at baseline, which will be randomized equally to receive a single dose of 750mg intravenous (IV) imsidolimab, 300mg IV imsidolimab or placebo. The primary endpoint of the Phase 3 program is the proportion of patients achieving clear or almost clear skin as determined by a Generalized Pustular Psoriasis Physician’s Global Assessment (GPPPGA) score of zero or 1 at week 4 of GEMINI-1. Patients will subsequently be re-enrolled in GEMINI-2, where they will receive monthly doses of 200mg subcutaneous imsidolimab or placebo depending upon whether they are responders, partial responders or non-responders to treatment under GEMINI-1. The objective of GEMINI-2 is to assess the efficacy and safety of imsidolimab after 6 months of monthly dosing. Top-line data from an interim analysis of GEMINI-1 is anticipated in the fourth quarter of 2023. We intend to complete execution of our Phase 3 program in GPP and outlicense imsidolimab prior to potential FDA approval. 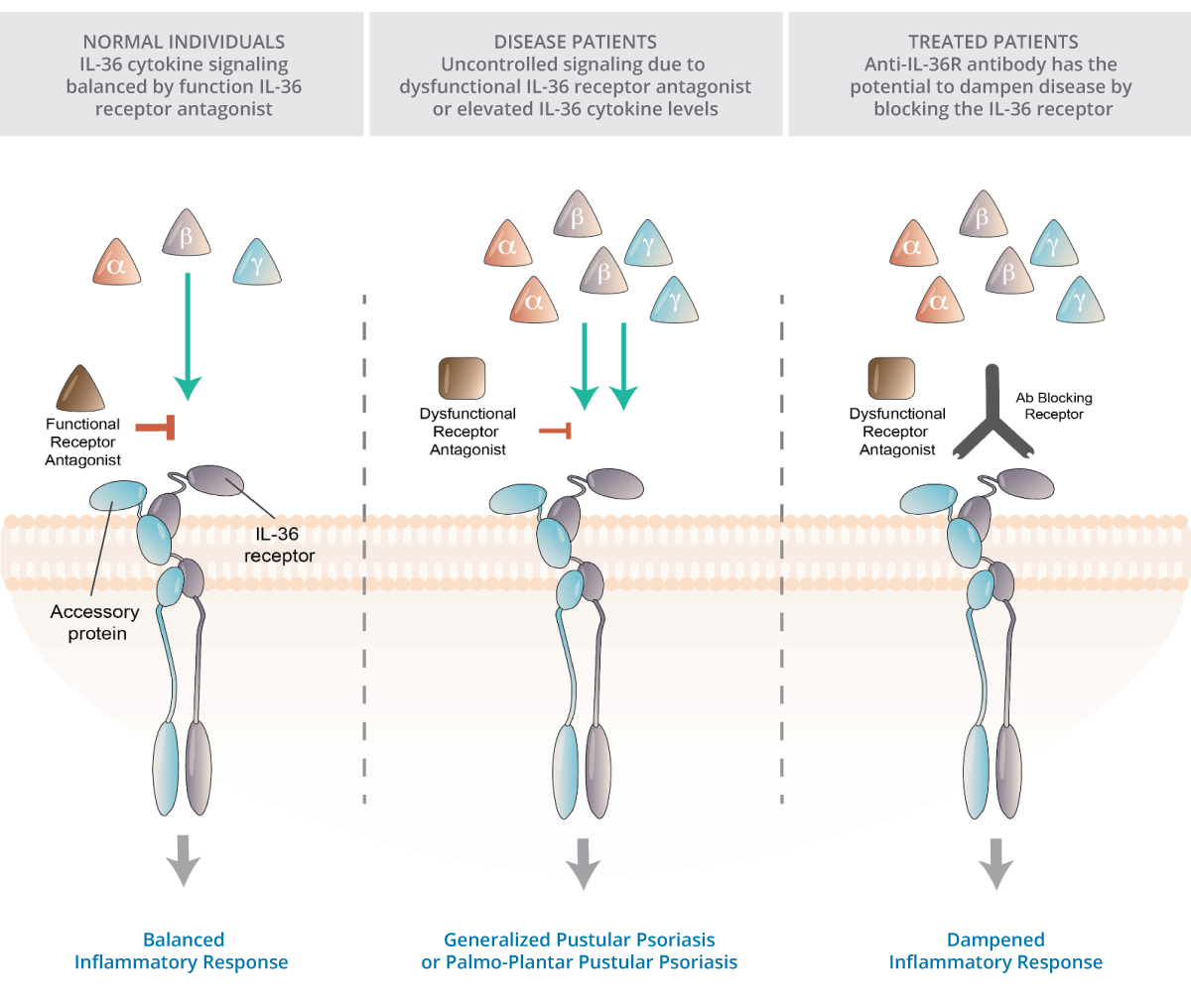 The Company has initiated a worldwide patient registry, called RADIANCE, of patients diagnosed with GPP, which is anticipated to improve understanding of the patient journey and support future clinical trial enrollment.